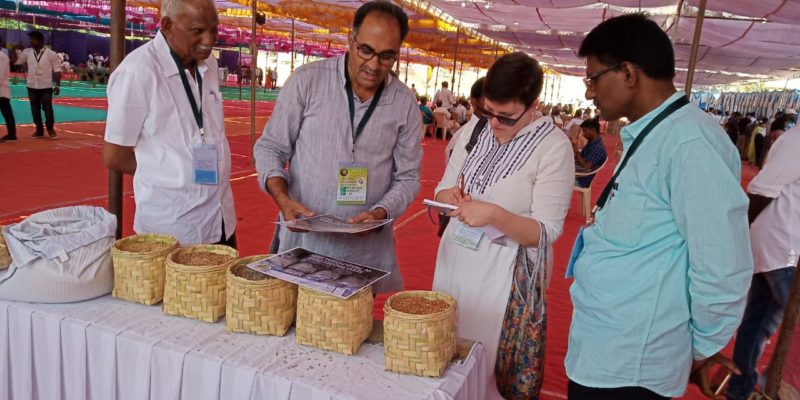 A foundation seed is the ‘pure seed stocks grown by or under the supervision of a public agency for use in the production of registered and certified seed’. When it comes to ‘informal’ farmer-level innovation, foundation seed(s) take on completely different meanings. For instance, one of the many traditional methods of storing seeds includes protecting them within the foundation and walls of homes. Moreover, the ability to store seeds from one year to the next provides the foundation necessary to support future innovations.

In this story, Darlapudi Ravi from Andhra Pradesh (centre of top photo), Sameer Zanjurne from Maharashtra and Ranjit Singh Bath from Punjab share their knowledge of traditional techniques for storing seeds. Moreover, their knowledge of seed-saving exhibits their quest for information, experimentation, and ultimately a journey of learning. Ravi through visits to tribal areas in many states, Ranjit by adopting a method from the south of India, and Sameer through his combination of multiple ‘non-conventional’ farming techniques.

A Variety of Ways to Store Varieties

Seed storage varies according to crop and region. In Assam, as shown by Soren Bora, farmers store rice still protected in the husk of the plant. In Punjab, one method involves burning camphor to create an anaerobic environment. The anaerobic conditions within a well-sealed container then protect the seeds from any pests. Along with this technique, Ranjit Singh Bath adopted a method he learned from south India for storing pulses. The method involves adding approximately one foot of sand on top of the pulses stored in a container or alternating layers of seed and sand. The scientific rational for the sand-mixture method: the sand particles kill insects by acting as an abrasive agent against the insect, and the sand acts as a barrier between seeds and insects. An assessment of traditional methods of pulse storage (including the sand-mixture method) found them to be inexpensive and eco-friendly, while maintaining high germination, low insect infestation, and low moisture content.

In terms of moisture content, a cucumber certainly contains a lot of moisture, so how does one store the seeds of a cucumber?  Sameer tells us about how he stores three varieties of cucumber on the walls of one of his farm’s out-houses. His grandfather built the walls using a special soil that forms under the trampled paths of cattle by compacting and mixing layers of cow dung and soil. To store the cucumber seed, simply cut the cucumber, throw the seeds against the wall and let the soil absorb the moisture. The cucumber seed stays attached to the wall until next season’s sowing period. Sameer went on to explain that the thick walls keep the house cool in the summer and warm in the colder months creating ideal conditions for both human inhabitants and seed storage. Traditionally, many varieties of seeds were stored in the walls and foundations or in large holes dug underneath the homes.

The method of storing underground, in part, inspired the seed-saving method developed by Ravi.  In Orissa’s tribal areas, he observed seeds stored by digging large holes in front of the houses. The seeds were placed in the holes with paddy grass, then cow dung, and finally mud.  As Ravi states, his method, “protects the desi seed in desi style, since the power of cow dung is greater than the power of chemicals.” He begins by treating the seed in cow urine and drying the seeds in the shade prior to storage. Ravi lines bamboo containers with cow dung, on top of the seeds he adds a layer of grass, then a layer of neem leaves and finally seals the container with cow dung. The grass layer absorbs moisture, while the neem leaves act as a natural insecticide. The use of neem to protect seeds from insects is widely known and practiced, while the other aspects of Ravi’s method come from his many visits to tribal areas.

Seeking and Sharing the Seeds of Knowledge Ravi seeks knowledge from tribal farmers because they have generations of experience farming without chemicals. Moreover, the tribal areas occur in hilly areas with poorer soil conditions and rely on rain-fed agriculture. He first became interested in traditional farming techniques through observation of tribal farms near his native home in Andhra Pradesh, but eventually he travelled to tribal areas throughout Chhattisgarh, Assam, Maharashtra, Telagana, Karnataka and, as previously mentioned, Orissa. After a few visits, he built up enough trust with the tribal farmers that they shared their knowledge with him. As he explains, “tribal areas give knowledge in a traditional way, so my knowledge and tribal knowledge is the same”. In addition to gaining knowledge about traditional seed storage from tribal farmers, Ravi also collects many varieties of seeds. On his farm he currently has 30 varieties of traditional paddy, 10 medicinal plants, 10 varieties of millets, and many varieties of vegetables seeds. For example, he has a red variety of okra and a gourd that provides multiple fruits from one stem. He shares seeds only with farmers who follow natural farming, following the traditional method of giving 10 kg and then collecting 20 kg in return the next season. With respect to knowledge-sharing, Ravi also works on international projects and expresses a  desire to learn from as well as teach people in other countries.

Rather than visiting tribal areas, Sameer speaks of having many gurus including Sri Sri Ravi Shankar and David Hogg. He combines three types of chemical free agricultural, biodynamic, natural farming and Homa/Vedic by selecting the practices from each that suit his current situation and needs. He speaks of needing to share this knowledge to make it available for future generations. His father passed away when he was a child, but he learned about his father’s farming practices from the community. Therefore, he trains farmers in the multiple-techniques that he has learned to ensure the practices continue into the future.

These chemical-free techniques of cultivation all depend on using seeds of traditional varieties. In other words, Desi seeds provide the foundation. These farmers demonstrate just how much knowledge can be built upon this foundation.